This report comes a bit late but I don’t want to let the 2013 edition of the NAC go without a shout.

The last time the nationals took place in Seattle was in 1988. Coming back was long over due. The late August date was chosen to improve the chances of clement weather, but it also came with a risk of very light wind. In fact I was in Seattle for business just a few weeks earlier and the beer can races has to be cancelled on Lake Washington for lack of wind. We certainly did not want to see a drifter!

Late summer is a special treat in Puget sound with long days and warm weather. The Beaux Arts Racing Fleet knows that and puts on a special treat every Wednesday night for at least a dozen boats from June through August. Most of the boats that race on Lake Washington patiently wait on the dock, under cover for 9 months. The B.A.R.F. has a nice setup where the boats can be winched up on the dock after racing, safely out of the wakes from the speed boats that run up and down the lake. When June comes, everyone looks for those week night races.

At any rate, several of the local boats were made available for charter which helped for people out of state like me who found it difficult to make the drive from Los Angeles. Diane Henkels as well as Charlie Quest were also able to get a nice ride.

About 2 weeks before the event, the Seattle YC decided that the help they were offering would cost us over $2,000. That was a bad surprise so plan B sprung into action and both Roger Hoesterey and Aaron Sharp started working the phone. Thank goodness, Chuck Lowry, a Beaux Arts resident and avid sailor offered to take the role of Primary Race Officer (PRO) for the three days and save the regatta.

Lake Washington runs North-South which is also the prevailing wind direction. Only rarely does the wind comes from the West, in which case all bets are off and the breeze becomes unstable.

On Friday for the Syd Corp Series, the racing started at 1:00, but the bad news was that of all boats it appeared that the boat borrowed from Roger Hoesterey was almost 20# under weight. We borrowed a few rocks form the lake bottom and threw them in the bottom of the boat to make weight. Much to our surprise there was a quite decent breeze that afternoon. We even saw some trapeze action for a few races. My crew Jim Ach and I were so excited to have a breeze that exceeded our expectations that we did very well. We were off to a great start such that at the end of the day we finished first and and took the Syd Corp trophy. I was ecstatic!

Saturday was a different story. Racing was to start around 10:00am, but this time the forecast called for the wing to turn from south to west then back the prevailing North. It became very difficult for the race committee to run square race courses as the volunteers were operating from the dock with one mark very close to the dock. As much as the day started with a light breeze, by lunch things got really bad and a couple of the races dragged on due to lack of wind half way through. Racing was postponed and a few of us took a dip in the lake. COntrary to popular beleif, the lake is really warm at that time of the year – that was a treat. Eventually the breeze got established later in the afternoon and we were able to resume racing. 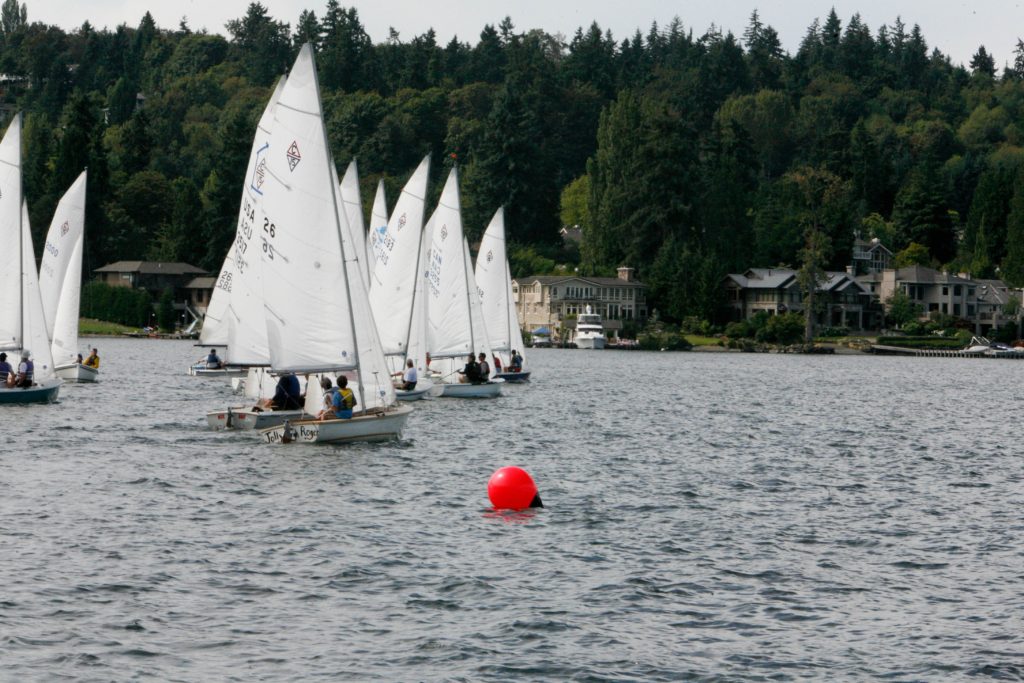 The annual meeting was held Saturday evening after races. That is when John Richardson got the idea of  running a Junior Series on Sunday morning. We had a number of juniors that were presents so we paired each junior with a crew and planned to run 3 short races before the continuation of the NAC series. 8 valiant sailors got up early to catch the morning breeze. It was light but it was fun. Ronan Kurtzikowsky who had been sailing every dad with his dad Greg as a crew won the short series. 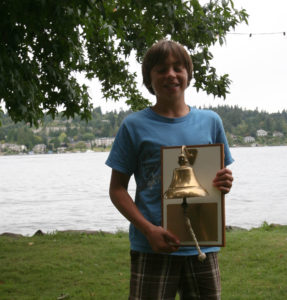 Chuck was concerned that we might get no wind at all on Sunday so he ran as many races as possible. Most of the races were about 20 min long which allowed quite a few races over the 2 days of the championship – in all Chuck gave us 13 races! But we got lucky on Sunday after a very light start for the juniors, the breeze was light but workable.

It confirmed the first place in A and B fleets with Clemett and Sharp respectively: 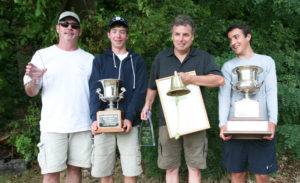 All three days, we were treated to incredible hospitality where Andrea Sharp, and her friends Julie and Carol arranged for breakfast, lunch and dinner. They pulled an unbelievable feat with a great food right there on the shoreline.

Attached are the full NAC results.