For this edition of the NAC, the wind gods were with us for the first week in August 6,7,8. Following the 2020 COVID hiatus, everyone was delighted to come back to our annual event down in sunny SoCal. With 15 boats registered, we had a quite a competitive group including representation from Half Moon Bay (3) and Sacramento (2) but also some C15 "old timers" Dave Marsh, Mike Shea and Wil Paul who entered the fray. It would have been a true reunion had Barrett Sprout and Kiersten Vance-Sprout joined in, but a newborn had to be a higher priority this year. Charlie Quest drove down with "First In Class", his trusty  52 years old hull #1!

This year, the date was to be later in the summer to move away from the common mid-july monsoon weather that can bring lots of moisture, lightning and no breeze as was the case in 2016. Several of us got a chance to attend the High Sierra Regatta at Huntington Lake 3 weeks earlier, which made for a nice warm up to the NAC.

On Thursday night, preceding day one, 8 C15s raced the weekly Sunstroke series in the main channel, with Dave Rumbaugh commanding the lead in a nice evening breeze. That was a great start.

On Friday, the SydCorp series started with Bruce Fleck as PRO in a 8-10kts breeze, Mike Blunt raced hard on his new boat 3744 and came ahead of Dave Rumbaugh by 2 points.

The Syd Corp series gave a split for A and B fleets that was to be validated by the day one overall results.

On Saturday, Bruce laid out some nice 30 min courses that gave everyone a chance to work the shifts to the weather mark. As some of the starts were getting aggressive, Bruce decided to fly the "I" flag forcing the OCS boats to go around the start line rather than simply dip the line. It proved very costly to me on day 2 when I found myself starting nearly a min behind the fleet.

Here is an album with pictures taken by SCCYC member Mariana Goebel.

But Sunday was not without excitement. Charlie started the day trying to repair the chain plate of  #1 with a reinforcement under the shroud which was pulling the boat apart. That was not going to happen, so, at the last minute Talin Babikian let Charlie borrow her boat - she was not racing with us as she was preparing the J/70 worlds . Charlie made it just in time for the first race!

Marc and Claire were not to be so fortunate. Once checked in with race committee, Marc noticed that he had lost the plug and was taking on water. A cork was hastily put in to stop the boat from sinking. By the time the boat arrived at the dock it had barely a 2" freeboard. It was of course a great disappointment as racing was out of the question for the day.

The entire event saw light to medium breeze with little use of the trapeze but with perfect sunny conditions. Thank you Ullman sails for providing trophy bags but also neck gaiters which provided great protection from the punishing sun.

In the end, Dave Rumbaugh held firmly to his champion title, followed closely by Mike Blunt. Mike Shea and Vincent Paternoster battled for 3rd place with Vincent taking 3rd with only a 1 point lead.

In the Cabrillo fleet we also saw some close racing. Dave Marsh and Dale Gordon tying in for 1st place on points and Lucy and Wil for third. 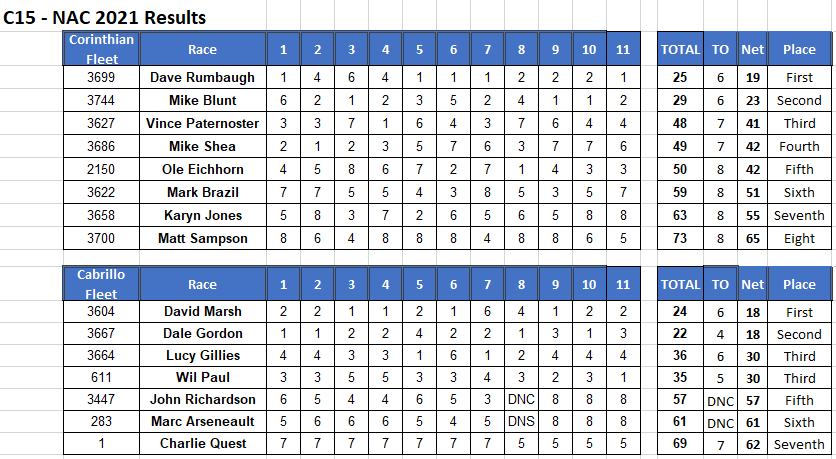 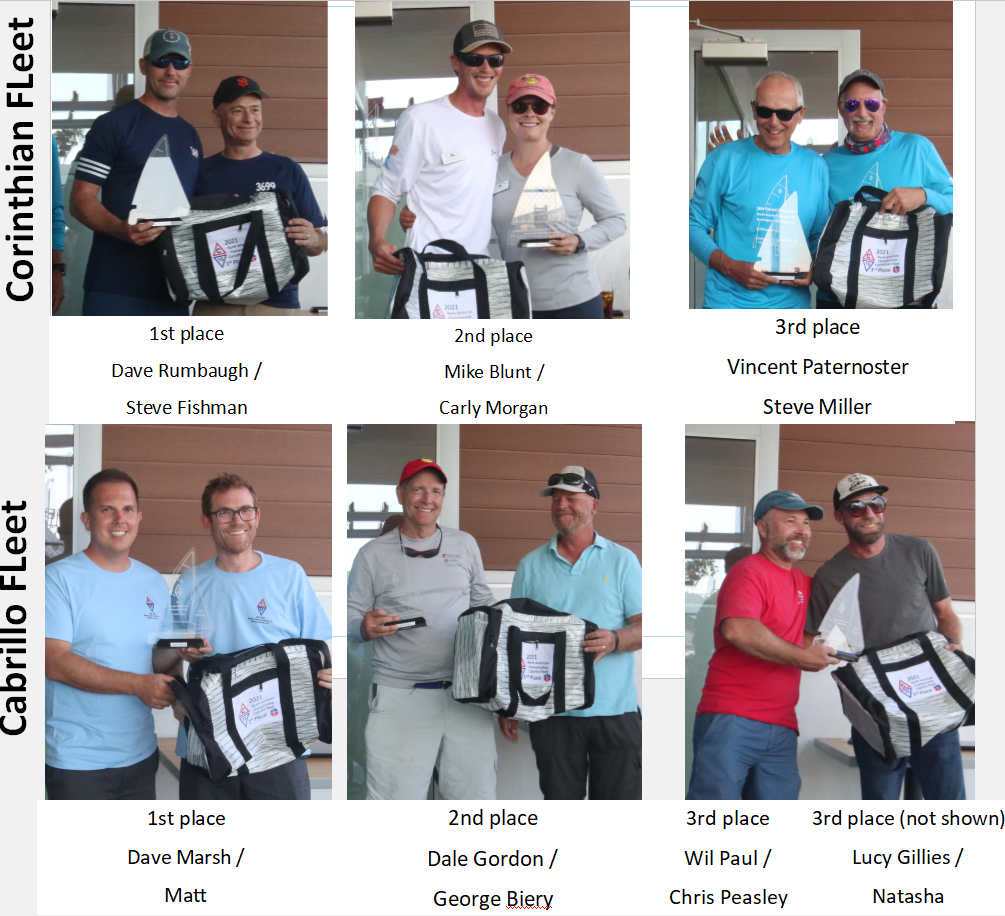 The 2021 NAC actually was the first big event held at SCCYC's new location on Bali way. Every one enjoyed the pleasant evenings on the patio and the Italian food catered by Sapori restaurant.

We look forward to the next edition of the NAC in Half Moon Bay at a date yet to be determined.