Note: It was with great pleasure that the November issue of the mainsheet magazine came in the mail to show the C15 on the front page. . Volume 28, Number 4, November 2010

Well this year’s NAC’s we’re living up to something different, at least on my boat, for sure. With the regatta being held out of South Coast Corinthian Yacht Club in Marina del Rey, CA, races would be run out in the swells of the Pacific Ocean. This would be a change from the past few events that we have had as a fleet. Once I found out that my crew Anne Newton could not make the trip due to her recent graduation from Officer School in the Coast Guard, I was looking for a replacement crew”one thing I have not had to worry about over the past 5 years sailing with Anne. The last change for me was hull numbers, from 2218 (which I have sailed to the last 3 NAC titles) to 3700. A hull which is newer, stiffer, but untested on the water! So needless to say I was going with the notion of having a good time and not so invested on winning this time around… (click on the attachment below for the full article) 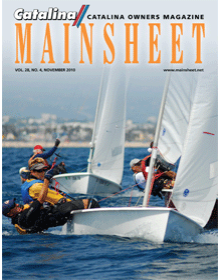